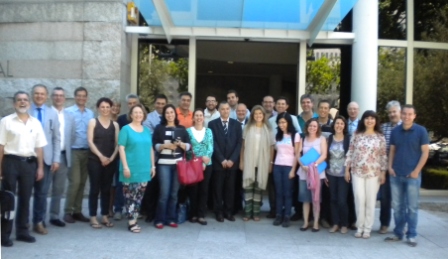 Twenty-one participants were designated by IOC Heads of Delegation to take part in the second international course for the leaders of table olive tasting panels held recently at IOC headquarters. Most of the participants belonged to official agricultural foodstuff laboratories and inspection agencies, although there were also some from interbranch or producer associations, and came from ten IOC Members [European Union (Denmark, Germany, Greece, Italy, Portugal and Spain), Morocco, Turkey and Uruguay] and one non-IOC member country, South Africa.

The table olive sector has been coming more and more into the spotlight in recent years, prompted by the importance placed on food quality improvement, sustainable production, standardisation of production processes and certification of product quality, including recognition of the organoleptic quality of table olives. Although not yet compulsory in IOC member countries, the sensory analysis of table olives is growing in importance, following in the footsteps of virgin olive oils.

This international course, held from 9 to 13 June, is the only official course of its kind in the world to train leaders of table olive tasting panels. At the end of the week, the Executive Director, Deputy Director and Head of the IOC Chemistry & Standardisation Unit took turns to present participants with their certificate of attendance and encouraged them to cooperate closely with the IOC in training tasters and setting up tasting panels for table olives in their home countries.