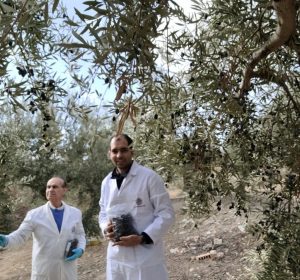 The four PhD scholars that started their research in February 2021 are actively concluding their first year of studies.

Akram Charfi, from Tunisia, is doing his thesis on food safety in the production of virgin olive oils under the supervision of Professor Sebastián Sanchez from the University of Jaén. He started with a literature review in which he gave an overview of the existing academic material on methods for the physical-chemical characterisation of olives and olive oil. Along with the quality parameters developed through these methods, other parameters, such as oxidative stability and phenolic compounds, were also analysed, as were procedures for the quantitative determination of contaminants. He then carried out a complete physical-chemical characterisation of olive fruits and oils during the first olive oil season of a traditional production field that belongs to the University of Jaén over five different periods. The commercial oils obtained during the six months of the study were also characterised. Meanwhile, the presence of contaminants (heavy metals, pesticides and polycyclic aromatic hydrocarbons) in commercial oils purchased from the market were studied, together with the oils obtained from the experimental farm during this first olive season. 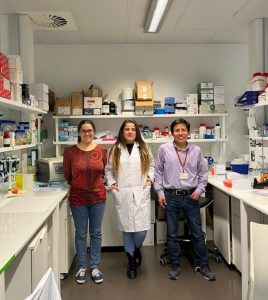 Andrea del Saz, from Spain, is doing her studies on the epigenomic consequences of hydroxytyrosol consumption in cardiometabolic diseases at the University of Castilla La Mancha under the supervision of Francesco Visioli, Alberto Dávalos and María del Carmen López de las Hazas. She has reviewed the existing literature on epigenetic changes induced by olive oil or its polyphenols and at the laboratory level. She has also developed different techniques to measure DNA methylation (epigenetic change) after treatment with hydroxytyrosol, the main phenolic compound in olive oil. 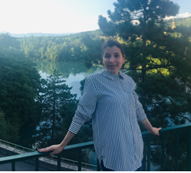 Laila Aqbouch, from Morocco, is doing her thesis on the genomics and adaptation of olive to climate change: identification of markers associated with drought and chilling requirement for flowering in order to select the most suitable genotypes, through the Institut AGRO, UMR Institut AGAP, University Montpellier, and under the supervision of Evelyne Costes and Bouchaib Khadari. 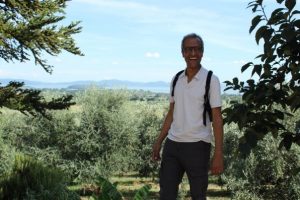 The thesis project will focus on two main approaches to understanding olive adaptation to climate change: (1) pinpoint loci under selection; and (2) perform genome-wide association studies (GWAS) to localize loci linked to adaptive phenotypic variation. She will use climate data from the Mediterranean basin, phenotypic data and genomics data on the most representative olive varieties cultivated in the region. 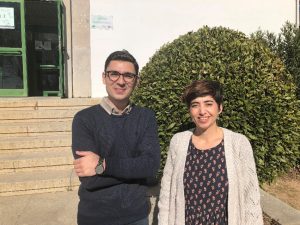 Rustu Efe Deger, from Turkey, is doing his thesis on cold requirements, genetic regulation and modelling of the flowering process in olive cultivars (Olea europaea subsp. europaea var. sativa) at the University of Córdoba under the supervision of Diego Barranco Navero and Concepción Muñoz Díez. To understand cultivar-specific requirements, Rustu has followed the budburst, flowering, and maturity stages of approximately 500 cultivars in the World Olive Germplasm Bank of Cordoba-UCO (WOGB-UCO) by using a modified version of the BBCH scale. As a complementary study, another experiment was conducted on 27 olive cultivars with no previous chilling requirements data for the same purpose. The cultivars were selected according to: a) their phenological data recorded in the (WOGB-UCO) from 2017 to 2021; b) OFF status the previous experimental year (2020-2021); and c) their economic and geographical origin. Samples have been taken weekly since 1 December 2021, and reproductive bud growth is monitored in samples kept at 20°C and 90% relative humidity (RH) for three weeks. The De Melo Abreu model, which forms the basis of the modelling approach, was implemented in R to predict the effect of temperature on the olive reproductive cycle. Modifications to the De Melo Abreu model are currently being studied to improve the model’s accuracy by including the budburst dates as inputs.