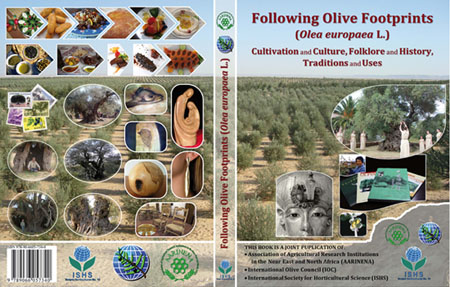 As of 1 December 2013, a 20% discount will be offered on the book Following  Olive Footprints - Cultivation and Culture, Folklore and History, Tradition and Uses published by the IOC in association with AARINENA (Association of Agricultural Research Institutions in the Near East & North Africa) and the ISHS (International Society for Horticultural Science). This publication will now sell at the price of €38 instead of the former €48.

Featuring written contributions by almost 100 authors from over 40 countries, this documentary style book tells the story of olive cultivation not only in the traditional olive growing countries such as Spain, Italy, Greece, Tunisia, Syria, Turkey or Egypt but also in the New World – Argentina, Australia, the United States or Peru – and more surprisingly in China, Japan, Pakistan, the Caucasus or Saudi Arabia.

The history and economic and environmental impact of olive cultivation, olive acreage and varieties, cultural practices, processing methods and traditions and customs linked to olives and olive oil are just some of the many subjects addressed by the authors who also explore the place of these two products in the kitchen as well as in cosmetics, body care, crafts and tourism. The end result is a book that makes fascinating reading for researchers, agricultural experts and the public at large.