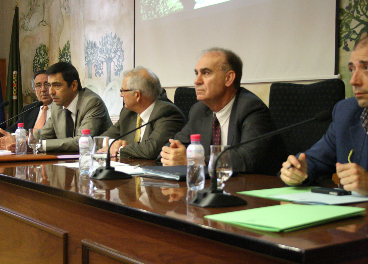 The IOC Executive Director Jean-Louis Barjol travelled to Andalusia to attend the opening of this year’s expert course on virgin olive oil tasting taught at the University of Jaén. When speaking at the inauguration on 1 October, he stressed how important it is for member countries to have sensory testing laboratories. Thus equipped, he said, “they can abide by their legal commitment of applying IOC trade standards in their international trade and it is easier for their exporters to access the ever more demanding world market where competition over quality is tough, especially if their country’s strategy is to target the bottled extra virgin olive oil segment of the market”. He mentioned the fact that of the 18 Members of the Organisation, 10 do not yet have any IOC-recognised tasting panel, although some of these export to the world market. Consequently, he told the IOC scholarship students that when they returned home they had a key part to play in making their country’s first panel come about or helping to set up more panels and he confirmed the IOC’s commitment to the continuous training of existing panels.

Mr Barjol highlighted the huge increase in the scholarships awarded by the IOC to allow students from the member countries to take this course. The number of scholarships has in fact gone up from an average of 11.6 per year between 2008 and 2012, to 28 in 2013. This year’s scholarship students are from Albania (1), Algeria (3), Argentina (3), Croatia (2), the European Union (4) [2 from Spain, 1 from Italy and 1 from Portugal], Israel (1), Jordan (4), Lebanon (2), Montenegro (1), Tunisia (4) and Turkey (2). Awardees were selected after an IOC call for applications. The selection process was based on applicants’ CVs, their training and professional experience and the geographical breakdown of previous scholarship awards. Students without a good command of Spanish have received intensive language tuition before the start of the classes.