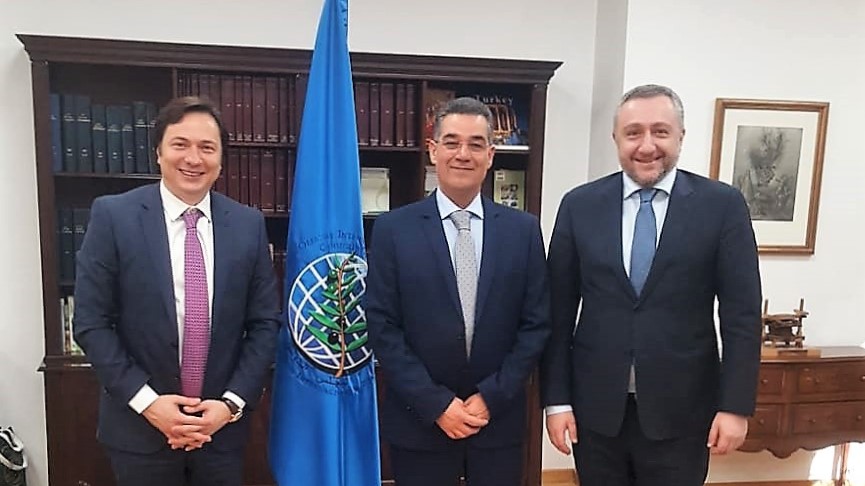 Georgia announces its intention to become a member of the IOC

Madrid - The Executive Director of the International Olive Council, Abdellatif Ghedira, recently welcomed the Ambassador for Georgia to Spain, H.E. Lila Giorgadze, who was accompanied by the owner of the largest olive-growing company in the country, George Svanideze.

The Ambassador informed Mr Ghedira that his country wished to join the IOC as soon as possible and that he wanted to know the conditions for entry. He said that, although Georgia was a small producer, it had an ambitious plan to improve both production and quality. Georgia currently produces a few hundred tonnes per year. He also mentioned that Georgia exports its olive oil to the United Arab Emirates.

Mr Svanideze, a leading partner in Georgian olive-growing, presented his plan to promote olive oil in the country. He works alongside farmers themselves: he encourages them to plant olive trees with the promise of buying all that they produce. He also plans to increase the olive-growing area of the country by more than 1 000 hectares in 2019. Georgia’s olive-growing area currently stands at 2 500 hectares.

The Executive Director explained the role of the IOC in developing and promoting the olive-growing sector and spoke about the advantages of membership for Georgia, in particular the expertise that the IOC can provide, training sessions for tasting panels, study grants, and access to global statistics and all other information relevant to the sector.