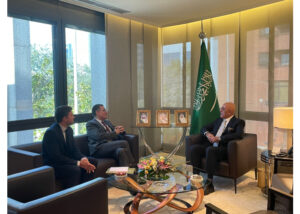 The Executive Director of the IOC, Abdellatif Ghedira, was welcomed by the Ambassador of the Kingdom of Saudi Arabia in Madrid, H.E. Azzam Abdulkarim Al Gain, at the embassy on 2 November 2022.

He was accompanied by the new Head of the External Relations Department, Andoni Olano, to present their host with the official decision on the accession of Saudi Arabia to the International Agreement on Olive Oil and Table Olives 2015, signed by the IOC Chair. The Executive Director was pleased to see this new producing country join the Organisation. 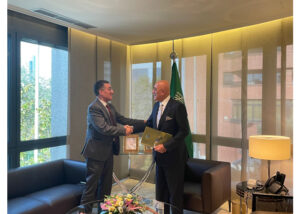 Mr Ghedira told the Saudi Ambassador about the mission he went on with the heads of the main Units of the Executive Secretariat to Saudi Arabia from 1 to 4 October 2022. He also informed him about the events planned for the 116th session of the Council of Members and took the opportunity to invite the Ambassador to the flag-raising ceremony for countries that have deposited their instruments of accession at the United Nations as well as the inauguration of the Garden of Peace at IOC headquarters on Friday 2 December 2022.