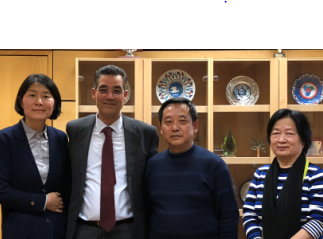 Ever closer ties with China

Madrid – The ties between the International Olive Council (IOC) and China are ever closer, with frequent contacts being made to establish scientific collaboration between them. The latest example was the visit to the IOC headquarters of a delegation of researchers and university professors of the Research Institute of Forestry and the corresponding official Chinese academy.  The meeting highlighted the climate of collaboration that has governed dialogue between the IOC and the agricultural and scientific sectors in China for almost fifty years. Although it is still taking its first steps in this sector, compared to other markets, China already has a strong demand for olive oil. The appeal of a healthy diet based on extra virgin olive oil is behind this rapid rise in consumption. Accordingly, the health benefits of this new product are beginning to introduce greater variation into local cuisine and are, more importantly, helping to ending poverty among many families of producers in subtropical areas. The Executive Director of the IOC reiterated his invitation to the delegation of Chinese researchers to submit an official request to the Executive Secretariat of the IOC in order to participate as observers in the meetings of the Advisory Committee of the IOC, which will be held in Jordan and Argentina this year. For its part, the Chinese delegation announced that it would be sending an official invitation, at the initiative of the authorities, for the IOC to visit the Research Institute of Forestry and the Forestry Academy in Beijing, which administers the department for olive growing of the People’s Republic of China.