Home / Blog / Mission of the IOC Executive Director to Libya 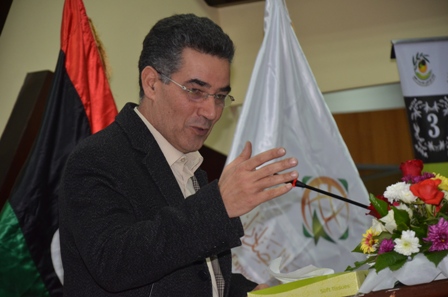 Mission of the IOC Executive Director to Libya

Abdellatif Ghedira, the Executive Director of the International Olive Council, recently travelled to Tripoli for the inauguration of the third edition of the international fair of olive oil and table olives. Speaking at the event, he highlighted the importance of the country to the Organisation as one of its founding members. Libya, which signed the 2015 International Agreement on Olive Oil and Table Olives and notified its provisional application on 6 April 2017, has an olive growing surface of 20 500 hectares, 95% of which is rain-fed, and which produces a yearly average of 16 000 t of olive oil and 3 000 t of table olives.

The international fair sought to encourage Libyan olive growers to develop their activities and invite them to participate in a national exportation programme.

As part of his visit, Mr Ghedira met with the Libyan Minister of Agriculture as well as with officials of the Ministry of the Economy and Trade. He also met Libyan representatives on the IOC Advisory Committee on Olive Oil and Table Olives and with the Head of the Delegation of Libya to the IOC.

At the end of the trip, he had the opportunity of inaugurating a training course on the prevention of diseases and pests affecting olive trees and to meet researchers of the National Institute of Research and Technology.