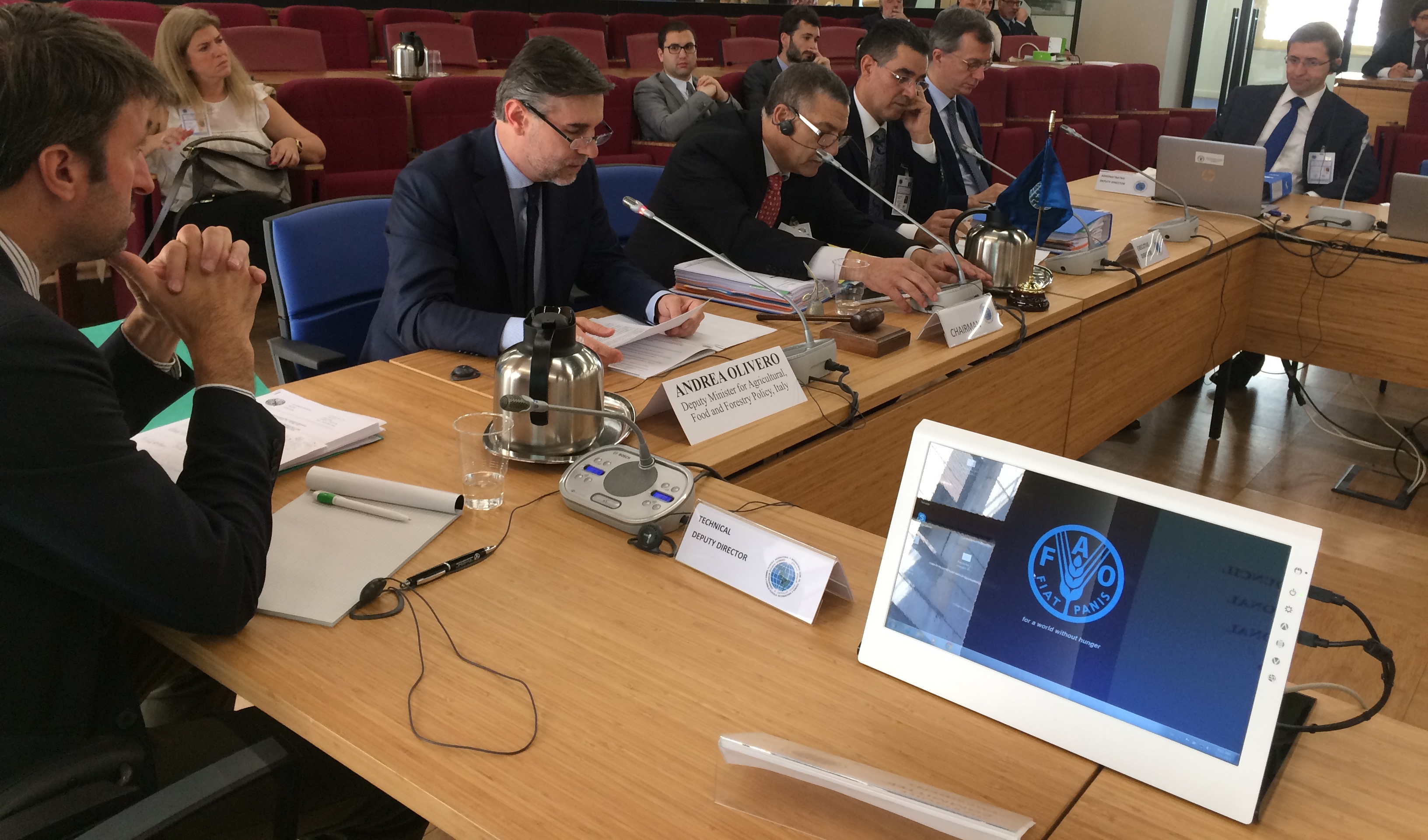 The Council of Members of the International Olive Council, the intergovernmental organisation responsible since 1959 of administering the International Agreement on Olive Oil and Table Olives, held its 105th regular session at the headquarters of the Food and Agriculture Organization of the United Nations (FAO) in Rome, at the invitation of the Italian authorities, from 23 to 26 May 2017. The session was presided by Algeria.

This session of the Council of Members was inaugurated by the Italian Deputy Minister of Agriculture, in the presence of representatives of most of the IOC Members (Algeria, the European Union, Jordan, Morocco, Palestine and Tunisia) and signatory countries (Argentina, Iran, Turkey and Uruguay), a number of observers, the vice chairperson of the IOC Advisory Committee on Olive Oil and Table Olives and representatives of the Japan Oilseed Processors Association (JOPA)).

Welcome and opening speeches were given by the Deputy Minister of Agricultural Policy, Mr Andrea Olivero, the Executive Director of the IOC, Mr Abdellatif Ghedira, and the Chairperson of the IOC, Mr Ammar Assabah, in the presence of the permanent representative of Italy before the United Nations Organizations in Rome, Mr Pierfrancesco Sacco. The floor was then given to the Chairperson of the Pandolea Association, Ms Loriana Abbruzzetti, who was invited to present the activities of her organisation. In her presentation, she encouraged all the Members of the IOC to contribute to the creation of an association of female olive oil producers for the dissemination of information, awareness raising and the promotion of olive oil in producer countries.

The specialised committees (Administrative and Financial Affairs, Economic and Promotion, and Chemistry and Standardisation) met on 23, 24 and 25 May.

In the meeting of the Administrative and Financial Affairs Committee, the Council of Members examined the state of ratifications, acceptances, approvals and provisional applications or accession to the International Agreement on Olive Oil and Table Olives, 2015. In particular it noted that Turkey and Egypt were finalising the procedures to deposit their instruments of ratification and that Brazil, China and Japan had expressed interest in accession.

In the area of economy and promotion, the Council of Members examined the world olive oil and table olive market trends over the 2015/16 campaigns (final figures) and 2016/17 (provisional figures) and the price trends. The Members were also informed about the different olive oil economy related activities put forward by the Executive Secretariat, namely the international study on consumer behaviour in member and non-member countries ; the harmonisation of customs codes for the main categories of olive oil; and the IOC’s market newsletter and website.

As regards the specific activities relating to the promotion of the consumption of olive products, the Council of Members took note of the meetings held with various institutions in connection with the promotion campaign in Japan, the media tour in Turkey for Japanese journalists, and as the organisation of activities to celebrate World Olive Day 2016 in member countries. It examined the results of the promotion campaign in Japan since July 2015 and took note of the excellent media coverage that it had received. It heard that the Japan campaign would continue into 2017, subject to budgetary availability, and that meetings had been planned in the United States with a view to establishing a promotion campaign strategy there.

Discussions also centred on the progress made in the promotion of the IOC trade standard with the Japanese and Chinese authorities and the contacts that would be established to this same end in the United States and Australia.

The IOC Executive Secretariat reminded the Members that grants would be awarded to member countries for the organisation of activities for World Olive Day on 26 November 2017. A call for proposals would be published to this end.

In the area of olive oil chemistry and standardisation of the trade of olive products, the Council of Members took note of the activities carried out since the 104th session of the Council and over the first half of 2017 in relation to testing methods for olive oils and olive-pomace oils; the organisation of the 17th edition of the IOC Mario Solinas Quality Award 2017 (single edition) ; the harmonisation of standards relating to olive oil and table olives (25th meeting of the of the CCFO and the ISO TC 34 SC 11); the organoleptic assessment of olive oil and table olives, the organisation of collaborative proficiency tests among physico-chemical testing laboratories and tasting panels; the status of the programme for the quality control of the olive oils and olive-pomace oils sold on import markets.

The Members took note of the implementation of a new recognition system for testing laboratories including three options (type A: Quality; type B: Purity; type C : Contaminants) to open the award of recognitions to all countries.

In the area of olive growing, olive oil technology and the environment, the Members took note of the progress made in activities since the 104th session, the work plan for 2017 and future orientations for 2017–19.

In particular, they examined the progress made in the project for the enhancement of genetic olive resources through the creation of pilot demonstration nurseries; the proposal for a seminar on Xylella fastidiosa; and the project on the environmental value of olive growing in the world (world CO2 balance for olive growing). Likewise, the Council of Members agreed to the continuation of a number of PhD scholarships.

On 24 May, the delegations and members of the IOC Executive Secretariat were invited to a dinner organised by the new Italian organisation Filiera Olivicola Olearia Italiana (FOOI), which brings together the main Italian organisations in the olive oil and table olive industry.

The Council of Members held its plenary sitting on 25 and 26 May and adopted ten decisions submitted by the Executive Secretariat.

At the opening ceremony of the plenary sitting, the Italian Minister of Agriculture, Mr Maurizio Martina, was represented by the Director General for International and European Union Policy of the Ministry of Agricultural Policy, Felice Assenza, and the Director-General of the FAO, Mr José Graziano da Silva, was represented by his Deputy Director-General, Ms Maria Helena Semedo. They both highlighted the fundamental role of the IOC in the development of the world olive sector. After the ceremony, the Chairperson of the Japan Oilseed Processors Association (JOPA) signed the IOC Agreement for the quality control of the olive oils and olive-pomace oils sold on import markets.

During the plenary session, the Members took note of the recommendations made by the IOC Advisory Committee on Olive Oil and Table Olives at its 49th meeting (18 May in Lisbon, Portugal), namely regarding the continuation of work on Xylella fastidiosa, statistics, the International IOC Mario Solinas Quality Award, the IOC institutional patronage of national quality competitions and the recognition of laboratories and tasting panels ; efforts in the areas of research on additional organoleptic tests, arbitration between panels and the harmonisation and revision of the nomenclature of customs codes, best before dates and storage conditions, traceability and the study on the maximum residue limits of pesticides. It also called for a greater use of social media to raise awareness among consumers as to the benefits of olive oil and to promote the consumption of this product.

The Council of Members welcomed a declaration on the recognition of training centres on olive growing and olive oil.

The delegations were invited to a technical visit on Saturday 27 May, of the oil mills in the Sabine region.

The Executive Secretariat thanked the Italian authorities, the FAO and the FOOI for their warm welcome and the excellent organisation of the meetings.