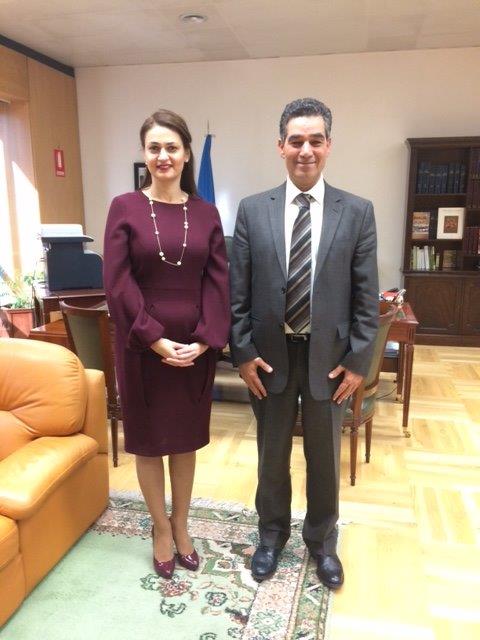 The new Ambassador of Cyprus visits the IOC Executive Director

H.E. Koula Sophianou, Ambassador of Cyprus in Madrid since September, paid a courtesy visit to the Executive Secretariat of the International Olive Council (IOC) on Monday 14 November. She met with the IOC Executive Director, Mr Abdellatif Ghedira, and his two deputies, Mr Lillo and Mr Sepetçi. Ms Sophianou, who has previously occupied the posts of Consul General of Cyprus in New York and Director of the Office of the Minister of Foreign Affairs, highlighted the importance of olive growing in her country. According to the latest data communicated by the Minister of Agriculture, Cyprus has an average annual production of olive oil and table olives of 6 000 t and 4 000 t respectively, and its olive acreage has increased to 13 000 ha.

Olive trees have a special place in the culture, economy, diet and even in religious ceremonies in Cyprus. Archaeological excavations have shown that olives have been part of the diet of the island’s inhabitants since the Neolithic period and that the olive tree was already widely grown at the end of the Bronze Age. What’s more, the island has twice as many olive trees as it has inhabitants.

The Ambassador expressed great enthusiasm for the work of the International Olive Council and her wish for increased collaboration between the member countries of this Organisation. She reported on a project on olive trees that is currently being undertaken by the University of Cyprus and on a joint programme by Cyprus and Greece to promote the development of the olive sector in Egypt.