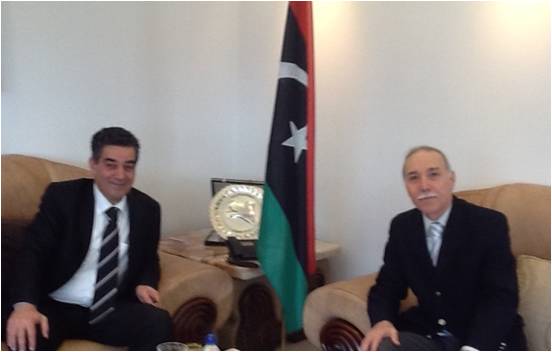 Meeting of the Executive Director with the Ambassador of Libya

The Executive Director of the International Olive Council, Mr Abdellatif Ghedira, paid a visit to the Ambassador of Libya to Spain, H.E. Mr Mohamed Alfaquee Saleh, who has been at the head of this North African country’s diplomatic mission in Madrid since 2012.

During his visit, which took place on 9 February 2016, the Executive Director stressed the importance of Libya in the IOC where it is a founding member country. Both parties said they hoped to strengthen research, development and technical training activities even further. The Executive Director took the opportunity to mention that a request for the appointment of representatives to the IOC Advisory Committee had recently been addressed to the Head of the Libyan Delegation. In addition, he presented the new 2015 International Agreement on Olive Oil and Table Olives – due to enter into force in January 2017 – and he gave the Ambassador the gift of a copy of the Arabic edition of the World Olive Encyclopaedia.