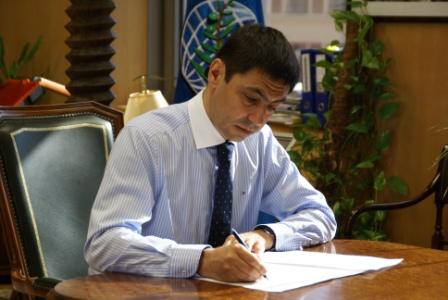 The U.S. market plays an important part in the overall balance of the olive oil sector. For this reason, IOC Executive Director Jean-Louis Barjol was back in the United States at the beginning of January, this time for a meeting in Sacramento with California Department of Food and Agriculture Secretary Karen Ross to tell her about the role of the IOC.

Next, he took part in a meeting with representatives of the California Olive Oil Council (COOC), the American Olive Oil Producers Association (AOOPA) and the North American Olive Oil Association (NAOOA). A joint idea of the IOC and the University of California at Davis, the meeting explored the possibility of putting in place joint generic promotion and research, particularly by taking up the offer of cooperation extended at the IOC/EU workshop held in Madrid in June 2013 to finance research on the authenticity and quality of olive oil. The COOC and AOOPA pledged to recommend the U.S. federal authorities to apply for IOC observer status and to ship samples of California extra virgin olive oils for participation in analyses of oil characteristics.

Mr Barjol then attended the Mid-Year Meeting of the NAOOA in San Francisco before visiting Fancy Food where he met with the event organisers to lay the groundwork for a possible IOC event at the next edition of the Show in New York.

After getting back from the United States, the Executive Director was expected at the opening ceremony of the Olio Officina Festival in Milan where the creator of this annual event, Luigi Caricato, presented him with the Olio Officina Prize. Targeted at a broad consumer audience, the chief goal of this festival is to spread the word about the many aspects of the olive world. By attending, the Executive Director was able to tell a wide public about the IOC and what it does.

The Executive Director’s engagements abroad in January ended with his first official visit to South Africa for the General Annual Meeting of the South African Olive Industry Association, SAOLIVE. He had been invited to address the meeting to inform South African producers who wanted to learn about the IOC at first hand before deciding whether to ask the South African authorities to take part in IOC proceedings, initially as an observer.

A few days later, on 3 February, the Executive Director had an appointment with the President of the National Olive Council of Iran, Seyyed Ahmad Bolandnazar, who visited Madrid to discuss strengthening the ties between the two institutions under the IOC grant schemes for technical and promotional activities and the possible entry of extra virgin olive oils from Iran for the Mario Solinas Quality Award.

On the same day a meeting took place at IOC headquarters with the coordinators of the working group on production costs to take stock of the progress made since the launch of the survey on this subject in December 2013.

Lastly, the Executive Director met with the Agricultural Counsellor from the U.S. Embassy in Madrid to inform him about his meetings in California.

A new development as of February 2014 is that the IOC market newsletter will be published in Spanish as well as English and French.

Anyone interested in keeping track of international news about the olive oil and table olive industry should read the IOC press review ( http://www.scoop.it/t/olive-news) and visit the IOC’s institutional page on Linkedin  http://www.linkedin.com/company/international-olive-council  for updates on IOC activities.