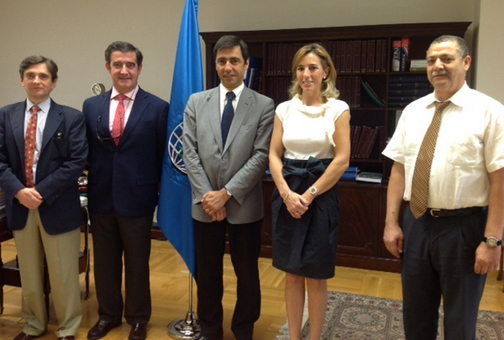 The IOC recently received a visit at its headquarters from the Board of Directors of QvExtra! Internacional who spelled out the plans for this new association set up in Spain.

Saying it was receptive to collaborating in producer initiatives of this type, the IOC told QvExtra that it wished to make the Organisation “a meeting place for producer associations that share the same objective of promoting and making stringently sure that top quality product reaches consumers’ plates”. The team from QvExtra heard that the IOC Advisory Committee on Olive Oil and Table Olives had decided to open the doors at its upcoming October 2013 meeting to associations not only from IOC member countries but also from non-member countries – for instance the North American Olive Oil Association (NAOOA) or the Japan Olive Association (JOA) – to allow them to give an overview of their initiatives to promote premium quality oils and to explore potential partnerships. QvExtra said they were interested in attending.

“We are voluntarily committed to offering consumers a product that is top-of-the range up to its best before date, which is why the quality parameters that have been set are more restrictive than in the rules and regulations”, said the association representatives while making it clear that “the project is hinged on compliance with IOC standards and on seeking to forge the greatest possible consensus in this respect elsewhere in the world”.