Home / Blog / The Egyptian flag returns to the IOC 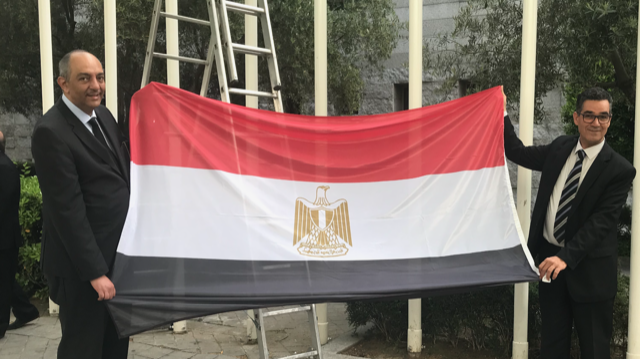 The Egyptian flag returns to the IOC

Madrid – The Egyptian flag is flying once again outside the headquarters of the International Olive Council (IOC). The flag raising ceremony was held in the presence of the Ambassador of Egypt to Spain, Omar Ahmed Abdel Wahab Selim, welcomed by the Executive Director Abdellatif Ghedira and senior officials of the IOC Executive Secretariat. In a speech, the Ambassador highlighted the climate of collaboration that reigned between Egypt and the IOC and thanked Mr Ghedira for the assistance that the Executive Secretariat had offered his country in completing the procedures for accession to the International Agreement on Olive Oil and Table Olives, 2015, before the United Nations. The Executive Director met the Ambassador’s words by welcoming Egypt’s return among the Members of the IOC and looking forward to working together on new and more ambitious goals.