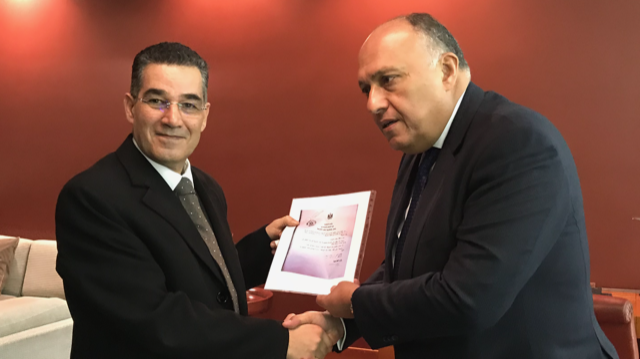 New York – Egypt is now officially a Member of the International Olive Council (in the picture: the Minister of Foreign Affairs of Egypt Sameh Shoukry and the Executive Director of the IOC Abdellatif Ghedira). On 3 May, Egypt deposited its instrument of accession to the International Agreement on Olive Oil and Table Olives, 2015, with the United Nations Office in New York. With an estimated production of approximately 650 000 t, Egypt is the first table olive producer in the world in 2017/18, posting a 30% year-on-year increase. Egypt is also the first country in terms of table olive consumption. According to the forecasts for this crop year, Egyptians will assign approximately 450 000 t of their olives to domestic consumption.

The Egyptian olive growing area is found along its north-western coast, spread across Alexandria, North Sinai and Sollum. This area has an arid climate, with mild winters. The average temperature during the coldest moths is of 7–18ºC and its an annual rainfall of 100–150 mm occurs over three to four weeks in the autumn and winter period.