BRUSSELS – Between the DG Agri, EU Commissioner for Agriculture Janusz Wojciechowski, his staff and the Executive Secretariat of the IOC, there is a joint desire to strengthen collaboration to support the Organisation and relaunch its mission internationally.

This was the outcome of the official meeting at the European Commission’s Berlaymont building in Brussels on 7 July 2022. Commissioner Janusz Wojciechowski, assisted by Roberto Berutti, a member of his cabinet, Koen Dillen, the Head of Unit responsible for olive oil, and Caroline Jeandin, deputy Head of Unit, welcomed IOC Executive Director Abdellatif Ghedira and his Deputy Executive Director Jaime Lillo on an official visit.

At the 114th session of the Council of Members in Tbilisi, Georgia, in November 2021, the Commissioner gave a welcome address to the entire institutional representation of olive oil producing and consuming countries (https://www.internationaloliveoil.org/more-than-a-greeting-a-real-wish/). Mr Ghedira wanted to thank the Commissioner personally, once pandemic-related restrictions had lifted, for his commitment and discuss topics of interest to the worldwide olive sector.

At the meeting, the parties discussed requests for new accessions and the application of the current International Agreement on Olive Oil and Table Olives, which has been signed by 44 countries, of which as many as 27 are represented by the EU, making it a privileged intermediary and also the main contributor to the IOC.

The parties agreed to intensify cooperation by sharing in the future, as they have done in the past, ideas that could facilitate institutional dialogue to stabilise international markets and facilitate the application of IOC standards. The goal is to encourage consumers and producers alike to apply these standards; countries such as the US, Japan, China, Brazil and MERCOSUR and Gulf countries are yet to reap the benefits of applying IOC standards, in particular in terms of the free movement of the various categories of olive oil according to the Codex Alimentarius customs codes.

In this regard, Mr Ghedira officially invited Commissioner Wojciechowski to the plenary session and the World Olive Day 2022 celebrations.

At the end of the meeting, a golden olive sapling offered as a gift to Commissioner Wojciechowski set the stage for a new custom that aims to increasingly accredit extra virgin olive oil as a health food.

With this wish in mind, Mr Ghedira asked the EU Commission and Commissioner Wojciechowski himself for their support so that the imminent launch of the EU standard on NutriScore would take into account the unique nutritional properties of extra virgin olive oil, which have been proven in numerous pieces of research conducted all over the world.

The future of the IOC began in Brussels with a shot of olive oil, a winner of this year’s Mario Solinas Quality Award (pictured). The IOC has held this competition to find the best extra virgin olive oils in all the world every year since 1993. 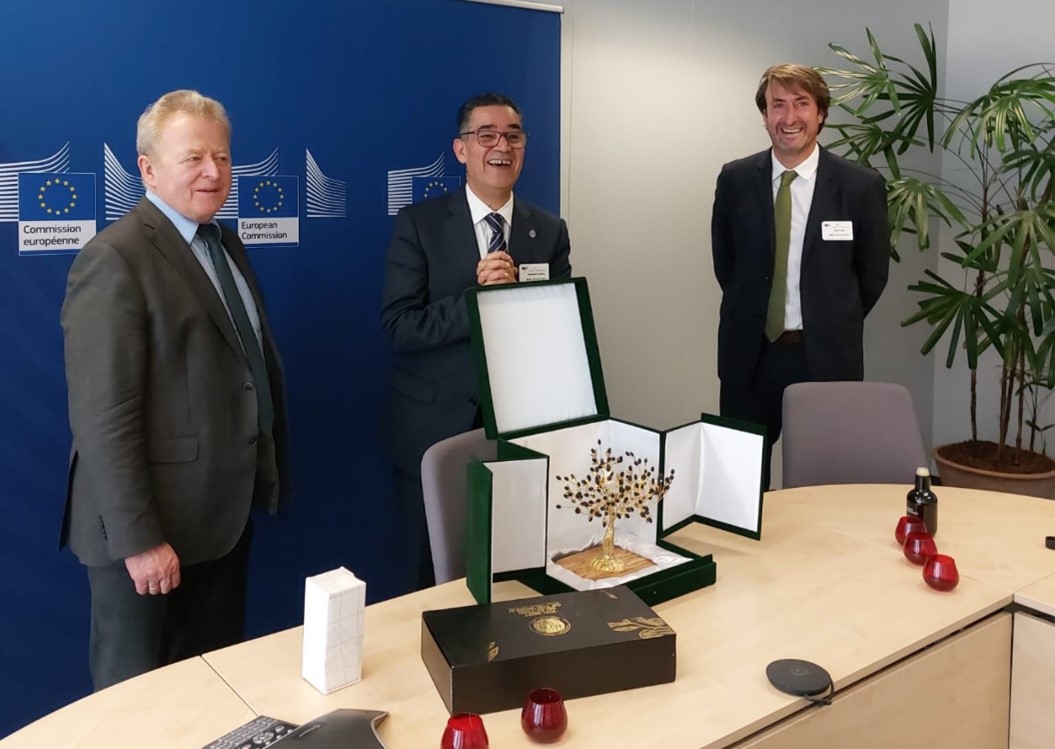