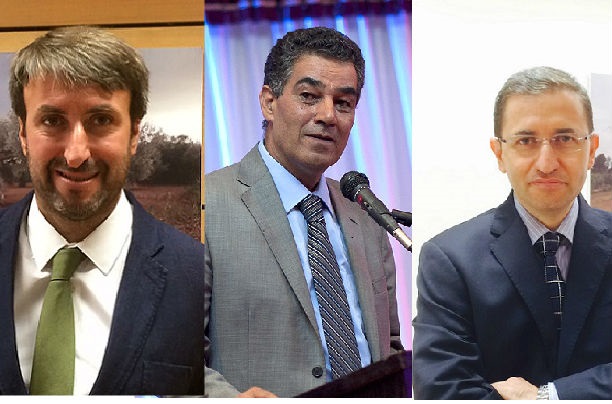 Following in the footsteps of new IOC Executive Director Abdellatif Ghedira who took up office on 1 January 2016, two new senior officials joined the Executive Secretariat as planned on 1 July. Jaime Lillo and Mustafa Sepetçi were selected by the Council of Members at its 26th extraordinary session in March 2016, the first as Deputy Director in charge of the technical, economic and promotion units, and the second as Deputy Director in charge of administrative and financial affairs.

Jaime Lillo, 42, is an agricultural engineer with a degree from the Polytechnic University of Madrid. He has worked at the Permanent Representation of Spain to the EU and as special advisor to the Ministry of Agriculture. As a former official of the European Commission's Directorate-General for Agriculture and Rural Development, he has also worked closely with various NGOs on a number of development and cooperation projects. Lillo, who was nominated by Spain for the post of Deputy Director and chosen by the Members after a long selection process, is a regular at international meetings of the United Nations, FAO, WTO and OECD. In addition to the management of the IOC technical portfolio, which includes R&D and environment, training and specific operations and olive oil chemistry and standardisation, the new Deputy Director, who has two children, will monitor the olive oil consumption promotion campaigns and economic research carried out by the IOC and the planned launch of a world olive observatory. The Executive Director has also tasked him with coordinating World Olive Day, held every year on 26 November, which is planned to be celebrated by all the member countries with grant funding from the IOC.

As Head of the Department of Foreign Affairs at the Ministry of Customs and Trade as of 2011, Mustafa Sepetçi represented Turkey at the IOC and was responsible for supervising the recognition of olive oil testing laboratories and the creation of the third international collection of olive germ plasm in collaboration with the IOC. In this capacity, he participated actively in the negotiation of the International Agreement on Olive Oil and Table Olives, 2015. As a regular participant in international meetings at the International Labour Organization (ILO), the International Co-operative Alliance (ICA) and the FAO, Sepetçi was put forward by Turkey for the post of Deputy Director and was chosen by the IOC member countries at the end of a long selection process. He holds a degree in political sciences from the University of Ankara, after which he specialised in international relations obtaining an M.A. at the London Metropolitan University. He has spent a long time working as an internal auditor in government administration, particularly in connection with the provincial government restructuring carried out by the Ministry of Customs and Trade. At 41, Mustafa Sepetçi, who is the father of three children, is keen to revitalise the administrative and financial structure of the IOC to ensure optimal use of the Organisation’s resources.