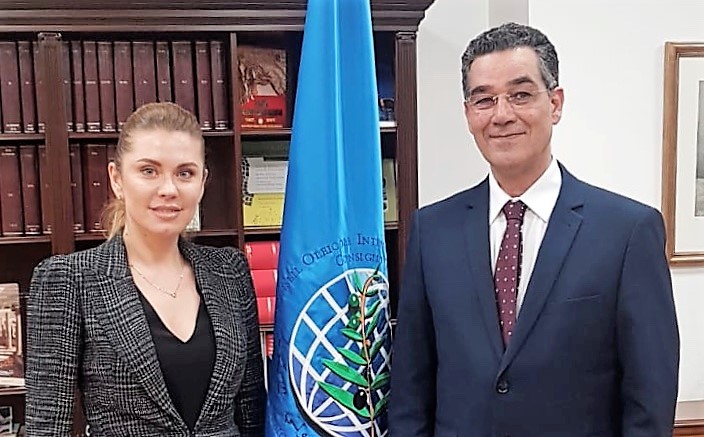 Moldova shows interest in the IOC

Madrid – The Ambassador of Moldova to Spain, H.E. Violeta Agrici, paid a courtesy visit to the Executive Director of the International Olive Council, Abdellatif Ghedira, at IOC headquarters on 6 March 2019.

During the meeting, they discussed IOC activities and proposals for quality control in international trade. The Ambassador said that her country depends entirely on olive oil imports and that the quality of the imported product was therefore fundamental.

The Executive Director explained that the IOC was effectively a guardian of olive oil quality but that it only intervened in matteres between member countries or upon request of a non-member country in cases which require the Organisation’s expertise. He also mentioned the advantages that countries receive through IOC membership.

Mr Ghedira suggested that Ms Agrici encourage her government to aid the work of the IOC in its position as observer, so that it may familiarize itself with the practices, either with the Council of Members or the Advisory Committee on olive oil and table olives.

The Ambassador committed to raising awareness within her country’s government to demonstrate the benefits of joining the sector, most of all, she said, given the rising interest for olive-growing, in particular olive oil consumption and the health benefits it brings.

Moldova shows interest in the IOC