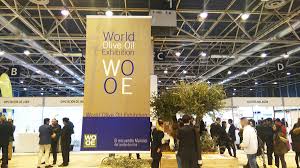 IOC at the Madrid WOOE on 21 March

Madrid – The latest updates on global olive oil figures; insights into the up-and-coming markets in this sector; results of the promotion campaigns to raise awareness of the benefits of olive oil; and the outcomes of the meetings of experts in the areas of olive oil chemistry, technology, environment and economy: these are some of the subjects that will be touched upon at the next World Olive Oil Exhibition (WOOE) in Madrid.

The Executive Director of the International Olive Council (IOC), Abdellatif Ghedira, will be one of the keynote speakers at the opening ceremony with a paper entitled “Global olive oil sector in figures”. The event will be held at 10 a.m. on 21 March, in Pavilion No. 2 of Madrid’s IFEMA trade fair centre.

The IOC holds an increasingly pivotal role among olive oil producer and consumer countries, acting as a reference point and source of information for countries wishing to become members of this important intergovernmental organisation.

The IOC is governed by the International Agreement on Olive Oil and Table Olives, 2015, which came into force on 1 January 2017. It is built out of a compendium of internationally established decisions, regulations, and quality and organoleptic assessment standards, whereby the countries bound by the Agreement operate under a common trade standard that breaks down geographical barriers and offers new prospects for growth in production to satisfy the growing demand on the market.